skip to main | skip to sidebar

Our collection of classic vintage clothes is of the highest quality .
You can come and view the collection or book a party- where we bring the clothes to you.

Sorry for not updating, been busy busy busy finding beautiful clothes for all you lucky people. We will be at Leigh On Sea Community Centre on Sat 18th September for anyone who fancies a mooch at the vintage & handmade fair. Look forward to seeing you all there.
Posted by fashionista at 17:39 No comments:

One of the visitors at village Green
Posted by fashionista at 09:58 No comments: 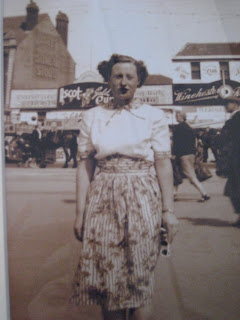 "I left school at 13 as in the war years you took 6 weeks out to work on the land, potato picking and doing sugar beet. If you turned 14 during this period you were aloud to leave school so that's what I did. I got a job at the depot.
Clothes were a big part of our life and we made alot of our own including dirndle skirts. Being one of 12 kids I used to hand all my wages over to the family but was given half a crown every week as my spending money. I used to buy my dresses, stockings and make-up with this.
I used to put my make-up on by oil light at my dressing table (my lipstick cost six-pence and so did my surefire cream) with my Dad watching me. As soon as I had completed my face he would then say "now you've put it on you can take it all off again." My reply was always, "would you like me to take it off and then put it all back on when I get to my friends house or shall I just go out like this?" I used to tell him I was just going to the pictures but was actually going out dancing until one night I missed my bus and had to run all the way home and ended up being 5 mins late. I got a clip round the ear and had to go to work the next day with a fat lip (Deservedly so!).
I used to go dancing to a hall at the depot where the soldiers used to attend. Eventually I asked my Dad if I could stay later as the dancing didn't get started until 8. He finally agreed that if I got depot transport home then it was ok. I had a whale of a time! I used to go every Mon, Fri & Sat to the Majestic at Wellington. (Telford). My Dad was a very strict Dad but also very fair. Every time my Mum had another child, (I'm one of 12) he would be the one going and buying her corsets and all the ladies things she needed for her (which really wasn't like men in those days.)
Before my 14th birthday he asked me what I would like as my present. I asked him for some Cami knickers. My Mum went Bananas and said they were disgusting and no way were they hanging on the washing line. Anyway, not only did my Dad buy me the knickers he bought me 3 pairs. One lemon, one pink and one green. AND THEY DID HANG ON THE LINE!!!!! He also bought me my first ever pair of high heels to dance in for that birthday. They were cuban heels and I loved them. My Dad would do anything for me.
When I was 17 I had a two week holiday to London. Me and a friend stayed with another friend who had got married and lived in a flat. We slept on her floor and had the best time ever. We went dancing every night to the Astoria. The first night I met a very tall american (I'm 4ft 9) and it was the first time I ever danced the jitterbug. Then I danced with an RAF soldier and then after that a navy officer. I still remember his his name - David. He asked me to go to an army do with him back where they were staying. Unfortunately I couldn't as I was going home that weekend but he asked me to stay on in London for longer. Unfortunately I didn't but my married friend was not amused with me that night as I had a great time dancing all night and she didn't! I still remember what I was wearing - It was a green taffeta dress with a a big shawl collar, fitted to the waist and then flared down. I bought it from a boutique in Shrewsbury. I wore clip on earring in an aquarius colour with a matching paste necklace (which I still have) and 6" stilletto heels."
Posted by fashionista at 13:50 No comments:

" My Aunt was a flapper girl in the 20's. My Grandmother always used to say she'd catch pneumonia because she never wore underwear underneath her skimpy dress. She had a big bust and it wasn't fashionable then so she used to have to strap her boobs right down, therefore she wasn't able to wear a bra!
My other memory of her was of her riding on the back of her husbands motorbike in a long black leather coat with a fitted riding hat. When it was her 80th birthday she insisted we take her to a motorbike exhibition. She couldn't quite get her leg over the seat to sit on one but made us all help her! How we laughed!"

Mary
Posted by fashionista at 20:49 No comments:

ONE OF THE MORE TOUCHING HISTORIES

"I make quilts and I made one for my Mother and one for my Mother in Law.
When my Mother died 2 years ago she was going to be cremated so I insisted that she was wrapped in the quilt I made her. It felt like the right thing to do."

Anon
Posted by fashionista at 20:39 No comments: 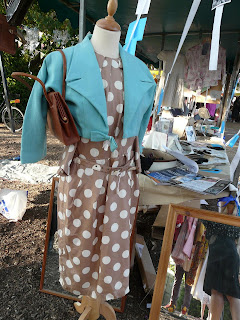 Thankyou
To everyone that contributed to Gloria Blue at Metal's Village Green at chalkwell Park.
We had a wonderful time and heard the BEST tales - of trousers, swimming costumes and knitted underwear.
We were touched, moved, delighted and green eyed with jealously at times, but most of all we loved listening and laughing with you.
We'll be sharing the tales with you over the next few weeks.
Info on the next Black Dress party will be going out in a couple of weeks.
Posted by Re:form at 15:44 1 comment: 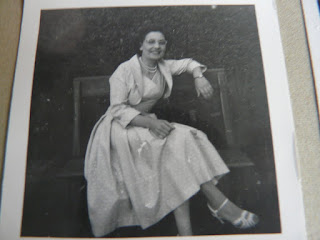 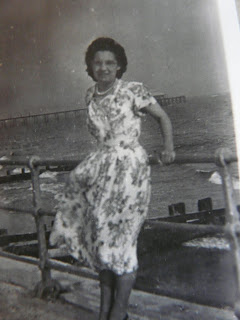 The dress was 5 guineas,her mother was shocked at the price,

She was taken to see Glen Miller but didn't get any Nylons,

She had a coat made from a blackmarket submarine blanket,

She was allowed to go bare legged in court,

Was careful with her shoe as getting them mended was a nightmare,

her lace up shoe were tied up with string.